The 1:8 scale enjoys a legendary status for lovers of high-quality vehicle models: in this size, no matter how small a deviation, it is immediately noticeable. The detailed implementation is therefore just as essential as perfect workmanship and conscientious assembly.

Minichamps launches a new and very exclusive edition with high-end models on a scale of 1:8. The idea was born from a special anniversary: it is exactly 25 years since Michael Schumacher won his first Formula 1 World Championship title at the Australian Grand Prix. His Benetton-Ford B 194 car is unforgotten and remains cult amongst Formula 1 fans around the world.

The magic moments this exceptional driver experienced with the V8 racing car can now be relived perfectly with this first model from the new edition. The model measures nearly 60 centimetres and is made from 82 components that have been assembled by hand in a painstaking production technique.

A detailed execution is just as indispensable as the perfect workmanship and meticulous assembly. A bespoke mix of materials is used for this purpose: the body is moulded from high-grade plastic resin to allow immaculate surfaces. The wheel suspensions are of lightweight, high-strength metal, just like the originals. After all, they have to bear the nearly four-kilogram model reliably. The realistic racing tyres of rubber have been realised just as accurately as the elegant aerodynamic bodywork attachments.

But the biggest challenge is the elaborate decoration on the colourful open-wheel car: it takes more than 250 individual steps to reproduce the characteristic Benetton look perfectly.

The Benetton-Ford B 194 from Minichamps on a scale of 1:8 is strictly limited to 300 individually numbered copies worldwide. It comes in a representative display case with an acrylic hood and elegant plinth. The object has a total weight of around ten kilograms. A stand is also available for the display case as an optional extra so that this can be positioned freely in a room.

Flair for your interior

Memories for your living room – excitement in your office: set the scene for the model in either your living or working area

The original – the story behind the model

The battle for the crown in the premier class of motor sports escalated in lap 35 in Adelaide: Schumacher pushes too hard, veers off the track, grazes a concrete wall and makes it back onto the track at the last second. At that moment, Hill comes round the corner and attacks Schumacher before the next right-hand bend, Schumacher closes the gap on the inside and that’s when the cars make contact. Schumacher flies over Hill’s front left wheel into the pile of tyres and has to abandon the race, the British driver drags himself back into the pits with the damaged Williams. Fifth place would have been enough for Hill to take the championship. Schumacher sits alongside the track, is frustrated and has already written off his hopes of the title. But things turn out differently: Hill has to abandon the race in the pits with a broken wheel suspension that would have taken too long to repair – Schumacher is World Champion by a single point.

The climax of a season that could hardly be beaten for tragedy and triumph. The fatal accidents involving Ayrton Senna and Roland Ratzenberger as well as Karl Wendlinger’s horrific crash in Monaco cast a cloud over the premier class of motors sports, but also bring about much stricter safety measures for both the vehicles and the circuits. Fans are ecstatic over the prodigal rise of Michael Schumacher. His duels with Damon Hill, the son of the former World Champion Graham Hill, attracted even more attention. The old guard with Nigel Mansell and Gerhard Berger were about to be overtaken. And the Benetton stable with its team boss Flavio Briatore, technical director Tom Walkinshaw and chief designer Ross Brawn is a legend a today.

The Benetton-Ford B 194 that won the World Championship still exists today. It belongs to the German Andreas Dünkel, the creator and operator of the “Motorworld” classic car centres. The green and blue racing car is part of the Michael Schumacher Private Collection in the Motorworld in Cologne that is open daily. Admission is free.

The Benetton-Ford B 194 is a compact and very manoeuvrable open-wheel car weighing only 515 kilograms that demonstrated its strengths very impressively in Schumacher’s hands on twisting and winding circuits. The sophisticated aerodynamics were instrumental in its success. The characteristically high nose improved the overall performance and was copied by other racing stables. Because the Ford-Cosworth engine was thermally uncritical, it only need small radiators that fitted into the narrow side pods. The slim waistline meant that the airflow could be guided ideally around the carbon monocoque and flow cleanly over the rear spoiler. The consequences were a perfect balance, high downforce with good handling properties and a low drag for higher speeds.

The driver’s cockpit in 1994 is still relatively spacious: neither a HANS system nor a halo impair the freedom of movement or field of vision. The bucket seat is custom-made for Michael Schumacher and offer little or no comfort. The semi-automatic gearbox is controlled by paddles on the steering wheel.

The original – the engine

The Ford-Cosworth ZETEC-R EC 3.5 litre V8 naturally aspirated engine was used to power the B 194, and was provided exclusively to the Mild Seven Benetton Team. It was developed and built by Cosworth, with Ford financing the work. The eight-cylinder engine had fewer moving parts than a ten or twelve-cylinder one, thus lowering the overall weight and friction losses. The bore x stroke quoted by the works was 99.75 × 55.9 mm; this resulted in a displacement of 3494.8 cm³. The EC thus had the biggest bore of all engines in the 1994 season. The output varied between 730 and 765 HP depending on the software.

From a present day perspective, the engine technology appears refreshingly simply and close-to-production: the cylinder banks are at a flat angle of 75 degrees with two overhead cams for each cylinder bank. And each cylinder has two intake and two exhaust valves – a classic 4-valve engine. The cams are driven by chains and gears.

However, Cosworth used expensive special materials for the first time in the EC: the combustion chambers had a ceramic lining, the con rods and valves were made from titanium and the pistons from a magnesium-copper-nickel alloy.

The original – the chassis

The chassis corresponds to the normal Formula 1 technology of that era, with double wishbone suspensions on the front and rear axles as well as pushrod spring/damper units. 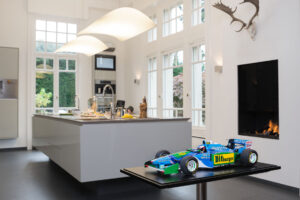 Do you have any questions about our new scale, the MINICHAMPS 1: 8 program or the models?

Feel free to contact us at any time: scaleeight@minichamps.de